Every year on June 5 is the World Environment Day (WED). It is a day to celebrate and raise global awareness to take positive environmental action to protect nature and the planet. SCMP echoes the WED significance and reports the living green stories. 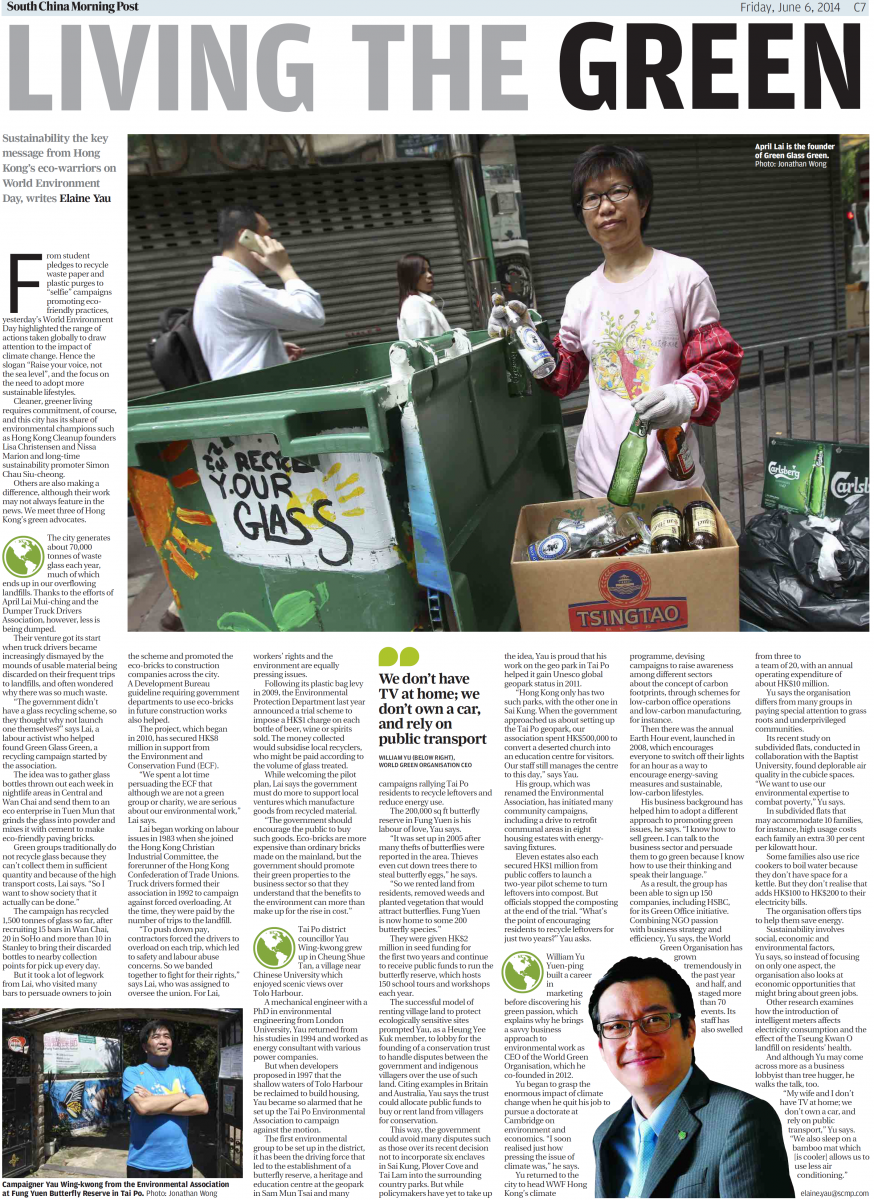 The city generates about 70,000 tonnes of waste glass each year, much of which ends up in our overflowing landfills. Thanks to the efforts of April Lai Mui-ching and the Dumper Truck Drivers Association, however, less is being dumped.

Their venture got its start when truck drivers became increasingly dismayed by the mounds of usable material being discarded on their frequent trips to landfills, and often wondered why there was so much waste.

“The government didn’t have a glass recycling scheme, so they thought why not launch one themselves?” says Lai, a labour activist who helped found Green Glass Green, a recycling campaign started by the association.

The idea was to gather glass bottles thrown out each week in nightlife areas in Central and Wan Chai and send them to an eco enterprise in Tuen Mun that grinds the glass into powder and mixes it with cement to make eco-friendly paving bricks.

Green groups traditionally do not recycle glass because they can’t collect them in sufficient quantity and because of the high transport costs, Lai says. “So I want to show society that it actually can be done.”

The campaign has recycled 1,500 tonnes of glass so far, after recruiting 15 bars in Wan Chai, 20 in SoHo and more than 10 in Stanley to bring their discarded bottles to nearby collection points for pick up every day.

But it took a lot of legwork from Lai, who visited many bars to persuade owners to join the scheme and promoted the eco-bricks to construction companies across the city. A Development Bureau guideline requiring government departments to use eco-bricks in future construction works also helped.

The project, which began in 2010, has secured HK$8 million in support from the Environment and Conservation Fund (ECF).

“We spent a lot time persuading the ECF that although we are not a green group or charity, we are serious about our environmental work,” Lai says.

Lai began working on labour issues in 1983 when she joined the Hong Kong Christian Industrial Committee, the forerunner of the Hong Kong Confederation of Trade Unions. Truck drivers formed their association in 1992 to campaign against forced overloading. At the time, they were paid by the number of trips to the landfill.

“To push down pay, contractors forced the drivers to overload on each trip, which led to safety and labour abuse concerns. So we banded together to fight for their rights,” says Lai, who was assigned to oversee the union. For Lai, workers’ rights and the environment are equally pressing issues.

Following its plastic bag levy in 2009, the Environmental Protection Department last year announced a trial scheme to impose a HK$1 charge on each bottle of beer, wine or spirits sold. The money collected would subsidise local recyclers, who might be paid according to the volume of glass treated.

While welcoming the pilot plan, Lai says the government must do more to support local ventures which manufacture goods from recycled material.

“The government should encourage the public to buy such goods. Eco-bricks are more expensive than ordinary bricks made on the mainland, but the government should promote their green properties to the business sector so that they understand that the benefits to the environment can more than make up for the rise in cost.”

This entry was posted in English, News and Events, 媒體報導, 新鮮熱報, 最新消息. Bookmark the permalink.